10 Weird (but Totally Normal) Things About Your Newborn

We've got the scoop on everything they won't tell you about at the hospital. 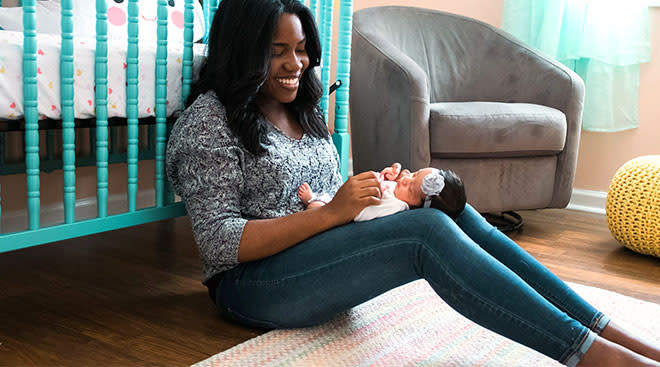 Sure, all those books and classes have prepped you for the major things: labor and delivery, the unavoidable sleepless nights and, of course, round-the-clock feedings. But what about the projectile poop and wandering eyes? Before you go running to the phone to call the pediatrician, we’ve got the rundown on all the freaky, but totally normal, things you’ll soon discover about newborns.

What’s the deal?
There’s no way around it—cradle cap (when baby’s scalp becomes dry and scaly) looks a little strange, but it’s pretty common. How come? Honestly, nobody knows for sure. The good news is any dryness or flakiness will usually disappear within baby’s first few months (though for some, random flare ups could go on for longer). In the meantime, try rubbing baby oil on the patches two or three times a week. Alanna Levine, MD, a parenting expert and pediatrician at Orangetown Pediatric Associates in New York, suggests making it a routine before baby’s bath and scraping the scales off with a fine-toothed comb.

When to worry: Luckily, there’s not too much worrying you need to do about this one—it’s basically nothing more than a common rash. But if it spreads beyond baby’s scalp or seems to be growing more severe, ask your doctor about getting a prescription ointment.

What’s the deal?
Okay, maybe our use of the word “explosive” is a bit much. But the truth is, you haven’t been officially initiated into parenthood until you’ve had to deal with a diaper blowout or two. In other words, you’re not the first mom to clean baby poop off those newly painted nursery walls. For a little schooling on the physics of it all, Levine breaks it down: “Newborn poop is mostly liquid with some mustard-seed texture mixed in,” she says. “As a result, it doesn’t take much power to propel it across a room.” Grossed out yet? Just wait until you’ve got an “up-the-backer” on your hands!

When to worry: As long as it has color (ranging from brown to green to yellow) and some seedy particles in it, baby’s poop should be good to go. But if you spot any signs of blood, Levine says it’s time to get the pediatrician on the phone.

What’s the deal?
Remember those crazy hormones that plagued your entire pregnancy? (How could you forget?) Well, they did a number on baby too. And, unfortunately, one of the side effects of hanging out in your belly for nine months can be…well, large breasts. Baby’s exposure to your hormones can often cause breast tissue to develop, since it takes a while for the hormones to wear off. But don’t stress, they’re generally nothing to be concerned about and should go away in time.

When to worry: Notice any redness around baby’s breast? If so, Levine also suggests taking baby’s temperature, to see if the redness is accompanied by a fever. These symptoms may be a sign of something more serious and reason to get baby checked out.

What’s the deal?
If you expected just a little cooing and occasional crying out of baby, think again. Babies make a racket. There’s grunting, groaning, snorting and all sorts of other funny sounds that you’ll hear out of them. But according to Levine, all those strange noises are caused by baby’s nasal passages being pretty narrow in the newborn stage, leading the mucus that gets trapped in there to create some added sound effects. So if you’ve been hearing a symphony of sounds lately, you may just need to spend more time clearing out baby’s nose with a nasal aspirator.

When to worry: Take note of whether or not baby grunts with each breath. If so, they may be having trouble breathing. In this case, Levine says to call your pediatrician ASAP.

What’s the deal?
Don’t forget that baby’s new to this world and everything in it and, as a result, they’re extra-sensitive to lots of things you’re already immune to. So if baby’s sneezing up a storm but not actually sick, they’re probably trying to banish any little foreign particles that have made their way into their nasal passages. Looking at the light will also be an adjustment, so if you take baby out on a bright sunny day and they start sneezing, it may actually be the sun—and not allergies—that’s to blame. Other common causes for sneezing could be to get rid of extra mucus or even amniotic fluid from the respiratory airways.

When to worry: If baby’s sneezes are accompanied by wheezing, have them checked out by your pediatrician to see if it may be allergies or something else that needs treatment. You’ll want to make sure baby’s breathing is kosher, swallowing is normal and lungs are clear in order to rule out anything serious.

What’s the deal?
Baby’s random jerks and spastic limb flailing may be a bit jarring to watch at first, but just keep in mind it’s all par for the course. In those first few months, baby will be dealing with a lot of developmental changes, one of which includes honing their startle reflex (or Moro reflex). Maybe you’ll see it happening randomly or maybe it comes after baby hears a loud noise, but either way that reflex will start to settle down around 3 or 4 months. Until then you might want to put your swaddling skills to good use: Babies often startle themselves awake, and swaddling will help baby sleep more soundly.

When to worry: You should actually only worry if baby isn’t exhibiting any jerkiness or spastic movements. Their absence could mean something’s not quite right. So if baby isn’t showing any of these signs, speak with your doctor.

What’s the deal?
Giving birth is a tough job, plain and simple. But remember, it’s not just you doing all the work down there. Baby’s working overtime to get down that birth canal. And after that journey, it’s no wonder they came out all purple and swollen-looking. Since baby’s little head is soft and malleable in the beginning, squeaking past your pelvic bone can definitely cause some flattening to occur. If it doesn’t happen during delivery, baby could also get some flat spots later on from lying on their back too much. If you notice this, try holding baby in your arms more, or as Levine suggests, increase tummy time when baby’s awake, and alternate where you place the toys, so they don’t favor any one side.

When to worry: If you’ve tried everything and baby’s head still seems flat in some places, talk to your pediatrician. They may need to wear a temporary helmet to correct the shape of their head. Helmets are most effective if worn as early as 4 to 6 months, so don’t wait too long to speak up if you feel like something’s wrong.

What’s the deal?
There’s no delicate way to say this. If you’ve just given birth to a newborn boy, you may notice his little man parts are significantly larger than you’d probably expect. Specifically, the testes. So what’s up? Baby can be affected by hormone exposure in your belly just before birth. Or, there could be extra fluid build-up in the sac around his testicles. But don’t worry, he’ll flush it out with his pee in a few days. Same goes for your baby girl, who may have swollen labia for a few days after delivery. Either way, the puffiness should go down with a little time. Speaking of, here’s a fun fact for you: Baby will shed so much fluid in the first few days of life that they will actually drop around 10 percent of their original body weight.

When to worry: If the swelling doesn’t go down within a few days after delivery, you should probably get it looked at, particularly if you’ve got a baby boy on your hands. Boys can develop a condition called hydrocele, which can actually take up to a year to correct on its own.

9. Blood in the Diaper

What’s the deal?
Spotting even the tiniest trace of blood in baby’s diaper is enough to freak out any new parent; but the truth is, it’s not always cause for alarm. There are many reasons why it may be happening, all of which are temporary. If you’ve just had a baby girl, she may be experiencing some extra side effects from being exposed to your hormones in utero. Have no worries, a “mini-period” is actually pretty common among infant girls going through a little estrogen withdrawal in the days following delivery. The hormones will even out soon enough. Other potential causes: a particularly rough bowel movement may have caused a little scratch or cut on the way out, but the bleeding should fade fast. Was your baby recently circumcised? The blood may be from his healing wound. Make sure to apply Vaseline whenever necessary to ease his pain and be extra liberal about moisturizing it. Same goes if baby has a nasty case of diaper rash.

When to worry: Though it’s probably totally normal, we’re going to give you an out on this one. For the sake of your own sanity, just go ahead and call your doctor any time you spot blood. Rare is the new parent who can see blood in their newborn’s diaper and actually manage to get some sleep that night.

What’s the deal?
In the beginning, a slight case of wonk-eye in baby is to be expected. Baby’s still trying to sort out all of their newfound abilities, including their sense of sight, and it will take some time to gain a little muscle control and hone those focusing techniques. But believe it or not, sometimes even when baby’s eyes may look like they’re crossed, they may not be. Because of a broad bridge of the nose, extra skin folds can mask some of the white parts of baby’s eyes. This can create a sort of optical illusion called pseudoesotropia. So take a closer look: Are baby’s pupils actually lined up and moving together? It may be all in your head after all! (It happens to the best of us.)

When to worry: According to Levine, if baby’s still showing signs of crossed or wandering eyes by 6 months, you should make an appointment to see if something else is at play. If baby’s eyes are chronically wandering off in two different directions, they may have strabismus; and if there’s just one eye going rogue, it may be amblyopia, or lazy eye.

Alanna Levine, MD, is a parenting expert and pediatrician at Orangetown Pediatric Associates in New York. She also serves on staff at Englewood Hospital and Medical Center in New Jersey and is a spokesperson for the American Academy of Pediatrics. She received her medical degree at Sackler School of Medicine in Tel Aviv, Israel, and completed her internship and residency at Mount Sinai Hospital in New York City.

Please note: The Bump and the materials and information it contains are not intended to, and do not constitute, medical or other health advice or diagnosis and should not be used as such. You should always consult with a qualified physician or health professional about your specific circumstances.

Plus, more from The Bump:

Baby Boot Camp: How to Navigate the Newborn Period

Tips for How to Get Baby to Sleep

What You’ll Need to Know About Baby’s First Bath The Most Important Thing to Bring With You to Prenatal Appointments